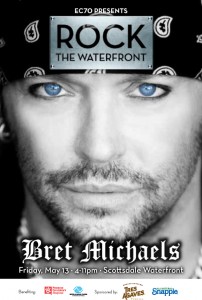 Calling all fans of Bret Michaels, Poison, Rock of Love and Tres Agaves! Tres Agaves co-sponsored Bret Michaels’ performance this past Friday, May 13th, at Scottsdale's Waterfront in Phoenix, Arizona. There was a stellar turnout at this uber rockin’ evening.  Check out what Michael Lopez, writer for the Phoenix New Times blog, had to say: http://blogs.phoenixnewtimes.com/uponsun/2011/05/bret_michaels_last_night_at_th.php Along with providing a stellar program of past and present hits from his 30 year music career, Bret kindly donated the majority of the event’s proceeds the Boys & Girls Club of Scottsdale and the Phoenix Children's Hospital. In case you missed this performance, click here to see a video filmed by none other than Tres Agaves co-founder, Chris Alvarez! Bret Michaels Rocking the Tres Agaves' Stage!
« Previous | Next »