Everybody knows about Tequila but not everybody knows that Tequila is actually geo-denominated spirit named after the city of Tequila. This namesake town is a surprisingly untouched town located in central Mexico about an hour's drive from Guadalajara in the state of Jalisco. In 2006 it was named a world heritage site for being the largest producer of agave spirits but there's more to the city than just shots, limes and agave plants. Although you wouldn't guess that by the monument that greets you as you enter the city. Get a load of this: 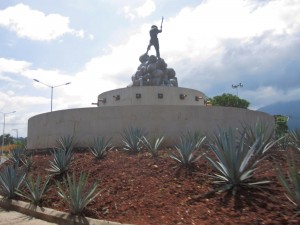 Sure. You should sample the juice. It's delicious. And there's a wide range of distilleries you can visit that range from small and quaint to full-on mass production houses. Yet, if you want to see what Mexico is like away from the beaches and high-rises and hotels Tequila would nonetheless be a good stop. It's authentic Mexico where everyday folk come to work, socialize, shop, and go to church. It's away from the hubbub of beach vendors or the bright lights of the big city. If it's not about big business it is about the community's business. And there's nothing like waking up to the quiet on the main plaza and the Church of Santiago Apostol at sunrise- before business gets started. 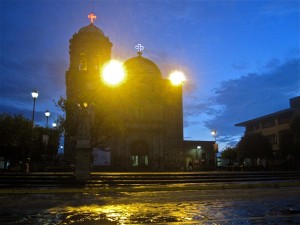 Here's some other facts about charming and rustic city:Population: 26,809 (according to Wikipedia) Other sources have it around 35,000 (Still surprisingly small given that it's only 27 miles from Guadalajara, which has 5 million inhabitants. Elevation: 3,996 feet (higher than I would have guessed, especially since it's in the "lowlands" Tequila region. Industry: Corn, bananas, agaves plants and Tequila production (with more acres devoted to corn than agave) Other names: Santiago de Tequila, Pueblo MágicoWant to know more about the city of Tequila? Click on these links: http://www.mexicomapxl.com/land-and-people/cities/tequila.html http://www.chapala.com/chapala/ojo2008/tequila.html http://en.wikipedia.org/wiki/Tequila,_Jalisco