Regional Cuisine of Mexico... and not a burrito in sight! 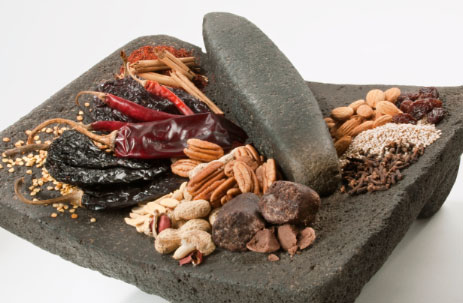 The many ingredients in Mexican 'Mole' sauce. By Eric Rubin, Brand Director of Tres Agaves I'm asked pretty regularly if I can give people a quick overview on the primary regional cuisines from Mexico, that is, the ones you see most often represented (correctly or not!) in Mexican restaurants in the U.S. Keep in mind, this is just a short blog entry, and Mexico is behind only France and China for the number of documented recipes for its native dishes. To me you have three primary regional cuisines: Yucatecan and Oaxacan in the South, and Jaliscan/Michoacan in central Mexico. Yes, I know I’m leaving out Mexico City! I put northern/border cuisine as closest to Tex-Mex, which I'll focus on in another entry. For now, I'll give you my abridged summary on the differences between the regions just mentioned. Yucatecan – Yucatecan dishes tend to be very colorful and lean towards a fusion of Spanish, Caribbean and native Mexican cuisine. Typical ingredients include: black beans, corn tortillas, pickled red onions, habañero peppers, salsas with fruit. Signature dishes are Cochinita Pibil, Panuchos, Poc Chuc, and Sopa de Lima. There is no distilled spirit native to the Yucatan. Oaxacan – I'd say Oaxacan is the most complex of all Mexican regional cuisines. Signature dishes include Tlayudas, moles of all types, and molletes. Mezcal is native to Oaxaca. Jaliscan/Michoacan – Jaliscan cuisine to me is the most rustic of the regions, rooted in a beautiful simplicity. Ingredients include: pinto beans, flor de mayo beans, corn tortillas, chile de arbol, Serrano chile. Signature dishes are Carnitas, Carne en su Jugo, Tortas Ahogadas, Birria, Pozole. And of course, Tequila is the spirit native to Jalisco!
« Previous | Next »